Less, More, and The Bodyguard

Finally acquired grown-up home wifi, and an up-to-date DVD player that is preprogrammed for many of the on-line video services. Hunting happily through menus, I found a kinda-ashamed-to-admit-it but WTF old favorite, all the previous seasons of Project Runway.

And I found two movies: one old favorite, one a delightful new surprise.

Why have I always liked "The Bodyguard?" I discovered one of several answers to that question at last.

At the most recent meeting of my small writing group, one member lamented that his character, a hard-boiled detective, needs something in the way of a life beyond solving the current mysterious crime spree.

We mulled over the usual kinds of trite complications of the "he raises and shows tropical fish" variety. But those just feel like mandatory stick-ons, and he and I left the meeting still feeling unsatisfied.

Now, with two attentive run-throughs of 'Bodyguard,' I feel closer to an answer. Frank Farmer simply is who and what he is. His own father describes him, very briefly, as always have been driven toward what scares him most, but we are spared any horrid wake-screaming-in-the-night scenes. He was in the Secret Service, was off duty when Reagan was shot. This troubles him, and we don't have to drag ourselves through a thick layer of self-dislike to feel it, understand it, know that it is wrong, but also accept it. The film touches Farmer's spirit very lightly and quickly several times, then lets him go. No childhood trauma, no pitying psychological morass. By the end, we know and like him, we would trust him with our lives, we understand that he will always do what he does and be how he is, and, like Rachael Marron, we are content to let him go.

Any writer of fiction could do infinitely worse than to create and manage such a character. I will recommend this film to my detective-writing colleague at our next meeting, and will keep it in mind in my own writing as well. Less can be infinitely more. 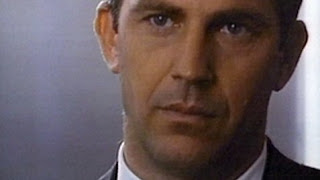 Lawrence Kasdan, the writer who created this character, and Mick Jackson, the director, deserve major kudos for this tour de force, as does Kevin Kostner who played the role.

Posted by Cassandra Was Right at 6:02 AM No comments: